The Food and Drug Administration has relaxed the guidelines for taking a pill that induces abortion, reviving one of the most contentious issues of theabortion debate. The change allows women to use the drug further intopregnancy and with fewer visits to the doctor.

The announcement on Wednesday came unexpectedly in the final stretch of the Obama administration and in the midst of an election campaign in which both parties covet the women’s vote. Some abortion opponents charged that the new regimen was politically motivated. The F.D.A. said its actions were based strictly on medical science.

The change was an unequivocal victory for abortion rights advocates who had been fighting laws in Texas, North Dakota and Ohio, among other states, that require doctors prescribing the pill to follow the directions on the F.D.A. label for using it, which had been more stringent.

The change brings the directions for taking the drug, mifepristone, in line with what has become standard medical practice in most states: reducing the dosage to 200 milligrams from 600 milligrams, decreasing the number of visits a woman must make to a doctor to two from three, and extending the period when she can take the pill to 10 weeks of pregnancy from seven weeks.

The debate over the drug, formerly known as RU-486, has raged for decades, with abortion rights groups demanding access to it in the United States in the 1990s. Medication-induced abortions have increasingly been used to terminate pregnancies in recent years, and limiting access to them has become an important front in the anti-abortion movement. They made up as much as a quarter of all abortions in 2011, according to the most recent figures from the Guttmacher Institute, which tracks women’s reproductive health issues. Planned Parenthood said as many as half of eligible women in its clinics request medication-induced abortions.

The original label on the drug was based on clinical evidence from the 1990s before the pill was approved in 2000. Doctors said that new evidence had emerged supporting lower doses, which have fewer side effects, and a longer period in which women could take the medication safely. In most states, doctors have been following the medically accepted regimen, even though the label advised otherwise, a fairly common medical practice known as off-label use. 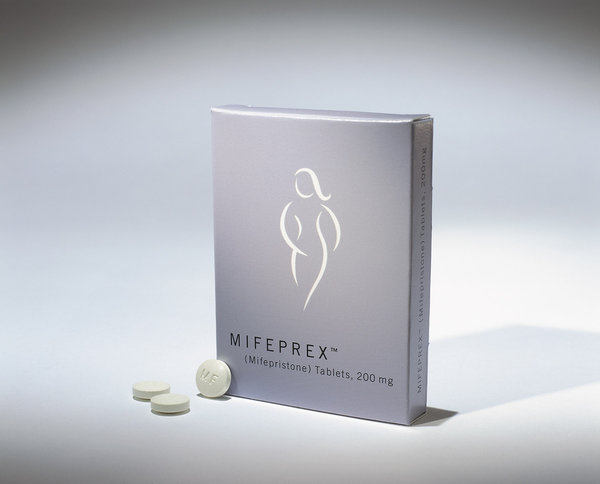 Mifeprex, a medication that induces abortion. The F.D.A. on Wednesday relaxed the requirements on use of the drug.

“This is a major shift both in closing the gap between science and legal regulation and in enabling women to exercise their constitutional right to terminate a pregnancy,” said Suzanne B. Goldberg, a law professor at Columbia University who specializes in sexuality and gender law.

The American Congress of Obstetricians and Gynecologists said in a statement that it was “pleased that the updated F.D.A.-approved regimen for mifepristone reflects the current available scientific evidence and best practices.”

Anti-abortion groups said that the change did nothing to improve safety for women, and that some women fell ill or died after taking the drug. (A spokeswoman for the company that makes the drug, Danco Laboratories, said there was no proof it caused the deaths.)

“It appears this has been done for the convenience and the profitability of the abortion industry,” said Randall O’Bannon, the director of education and research for the National Right to Life Committee.

Eric Scheidler, the executive director of the Pro-Life Action League, an anti-abortion group based in Chicago, said: “My first thought was that this is a bone that the Obama administration was throwing out there to their friends in the abortion lobby.”

The drug works by blocking receptors of progesterone, an important hormone in pregnancy. Women have to get the drug from a medical provider. They can also get another drug, misoprostol, in the same first visit to the provider, according to the new label. Together the drugs inducemiscarriage. The label still requires a “follow-up with the health care provider,” but some abortion rights advocates said that could be interpreted as a lab test or something that did not require a visit to a doctor.

Many states have passed laws to restrict the use of mifepristone since its F.D.A. approval. Some of them require medical professionals who administer the drug to be licensed physicians, rather than nurses or physician assistants. Many states also require the prescribing doctor to be present with the patient, a rule that abortion rights advocates say blocks women in rural areas from receiving the medication remotely.

Laws requiring physicians to adhere to the guidelines on the label have also passed in Arkansas, Oklahoma, and Arizona, but have been blocked by court order.

It was not immediately clear what the change would mean for state laws and the future of the legal effort by anti-abortion groups. Kristi Hamrick, a spokeswoman for Americans United for Life, an organization that drafts model legislation seeking to regulate the drugs, said, “This is just Day 1 and so our lawyers are looking at it.” The F.D.A. said it had followed regulatory procedure in changing the label. Danco submitted an application last May, and the application was subject to a 10-month review period, which ended March 29, the agency said.

“Honestly, I think the timing was based on when the company put in the application for a label change, not based on election timing,” said Susan Wood, the director of the Jacobs Institute of Women’s Health at the Milken Institute School of Public Health at George Washington University. “The F.D.A. just responded as part of their regulatory responsibilities, not on a political time frame.”

“This will allow us to do two things immediately: Expand medical abortions up to 10 weeks of pregnancy, and cut out the unnecessary additional visit for the second dose of medication,” said Amy Hagstrom Miller, the president of Whole Woman’s Health, which has abortion facilities in five states including Texas and is the lead plaintiff in an abortion case before the Supreme Court.

More than 40 percent of patients at the group’s Texas clinics chose medication abortions before Texas passed a law in 2013, requiring, among other things, that doctors follow the F.D.A.’s protocol. Since then, only about 5 percent have, she said.

Dr. Raegan McDonald-Mosley, the chief medical officer of Planned Parenthood Federation of America, said the change would reduce confusion among patients who had to sign two sets of consent forms, one with the regimen recommended by much of medical science and one that detailed the requirements on the F.D.A. label.

“Now those two things are in sync,” she said.- The New York Times