Malaysian Prime Minister, Najib Razak, doesn’t really care about what the Malaysian people think of him as far as his scandals are concerned. From allegations of corruption, money laundering and even murder, none of them could make him resign. He would have had been impeached in other democracy countries by now.

Welcome to Malaysia, a country with endless possibilities. After the recent intimidation and threat of charging two journalists with Australian Broadcasting Corporation – reporter Linton Besser and cameraman Louie Eroglu – but was later dropped after realising it could easily attract a diplomatic scandal, the Australian news network has made good on its promise to release its findings.

Titled “State of Fear: Murder and Money in Malaysia”, the 45-minute ABC’s Four Corners investigative programme was released to the public on Monday. Unlike last year’s “Murder in Malaysia” investigative programme by Al-Jazeera, the ABC’s version extended the coverage to include Najib Razak’s 1MDB and cash found in his private banking account, on top of several murder cases related. 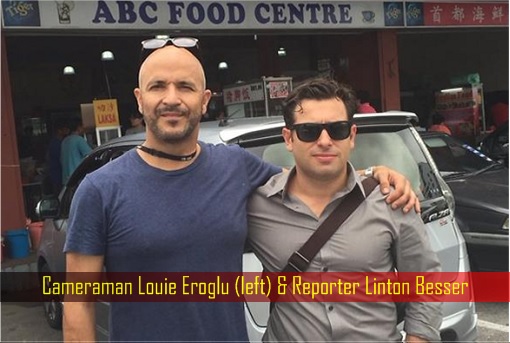 However, Najib’s 1MDB scandal was too explosive and complicated to be squeezed into a 45 minutes programme. Therefore, ABC did Najib a favour by giving him a free slot on their print and electronic media. Turns out, Najib was so popular that not only Saudi’s Ministry of Finance happily gave away US$80 million cash to him, not one but two princes did the same too.

Australian Broadcasting Corporation also published a letter allegedly from Saud Abdulaziz Majid Al-Saud’s private office and signed by Prince Saud Abdulaziz Al-Saud, the only document to prove that the Saudi royal family had indeed given money to PM Najib Razak. But why couldn’t Najib administration publish such important document while a foreign news agency could? 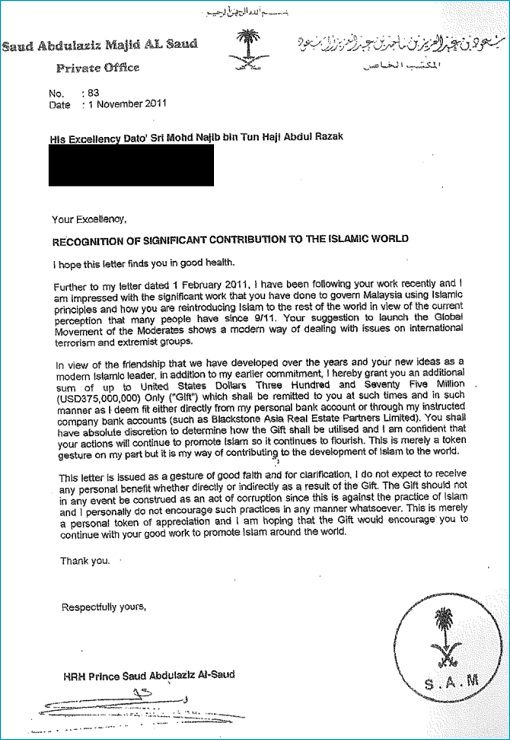 The only explanation – the letter was too good to be true, or rather too questionable to be published. The contents of the letter itself was too“fake” as it tries too hard to clear Najib’s name by stating the gift of US$375 million should not be construed as an act of corruption. It was like a letter from Pablo Escobar giving away a billion dollar to President George Bush and said it wasn’t an act of corruption (*grin*).

And the notorious Colombian drug lord could give away a billion US dollar without losing sleep because he was worth at least US$30 billion in the 1990s, mind you. But none of the Saudi princes mentioned was a billionaire so how could they give away free cash, with no strings attached, ranging from US$100 million (11 Feb, 2011) to US$800 million (1 Mar, 2013)? 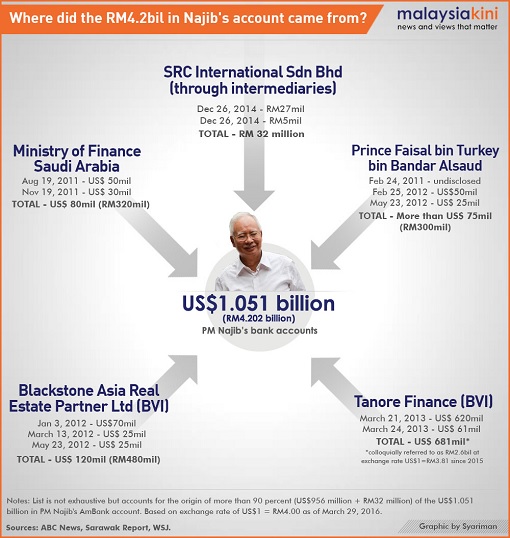 The letter from a supposed Saudi donor, signed by a Prince Saud Abdulaziz al-Saud from the Private Office of Saud Abdulaziz Majid al-Saud raises question about the authenticity of the prince and therefore the letter itself. The name was too generic to be traced simply because there’re a staggering 15,000 members in the House of Saud.

Saud bin Abdulaziz al-Saud was the King of Saudi Arabia from 1953 to 1964 so it can’t be him. Hence, the trace starts with Saud Abdulaziz Majid al-Saud. A prince, Abdulaziz bin Majid, whose father is late Majid bin Abdulaziz who in turned was a son of King Abdulaziz, is the former governor of Madinah Province from 2005 to 2013. 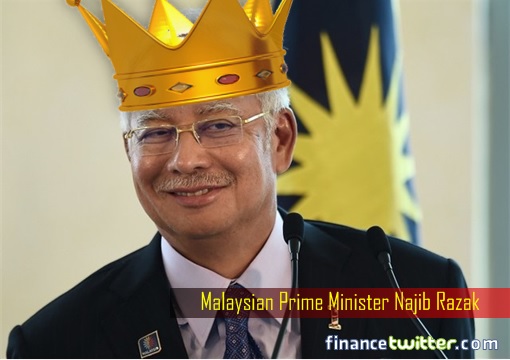 Interestingly, this former governor of Madinah has a son bearing a similar name – Prince Saud bin Abdul Aziz bin Majed Al-Saud. Then, there is also another prince, Prince Saud bin Abdulaziz bin Nasir Al-Saud, who was jailed for life after bludgeoning his manservant Bandar Abdulaziz to death in London. So, who’s the real donor here? Well, to hell with tracing the identity of this (fake) prince.

Turns out, it doesn’t matter as far as the confusion of names from the letter is concerned. Finance Twitter emailed Linton Besser, the author of the news article, and was told that Prince Saud only did the pledging but the actual dollars and cents came from Prince Turkey, or rather Prince Faisal bin Turkey bin Bandar Alsaud. 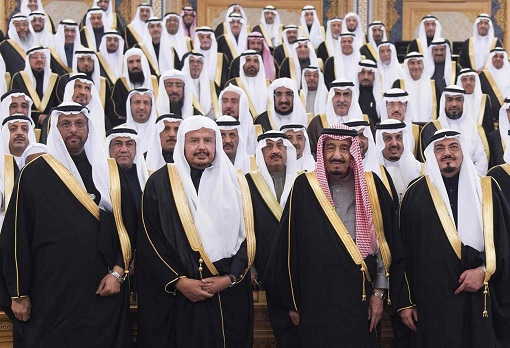 So there you have it. The unidentifiable Prince Saud Abdulaziz al-Saud from the Private Office of Saud Abdulaziz Majid al-Saud was merely a ghost who drafted the letter, probably back-dated, something like how Malaysian politicians normally do when they issue “Letter of Support” to their preferred cronies or family members so that they could win certain projects.

As revealed by Sarawak Report, perhaps we should not chase the shadow of the Saudi prince donors, who could be fictitious after all. So far, the biggest culprit identified is Sheikh Jho Low who owns both Good Star Limited and Blackstone Asia Real Estate Partners Limited companies – receiving funds from fictitious Saudi princes before sending the money to Najib Razak. 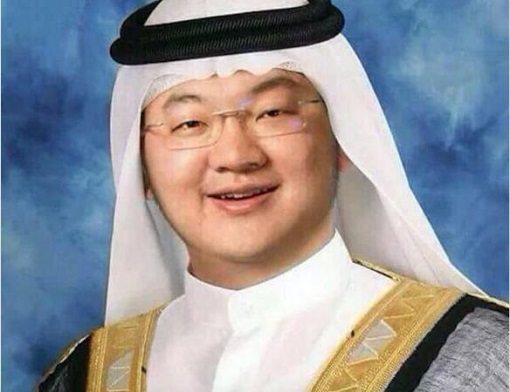 Together with the boss of British Virgin Islands incorporated Aabar PJS Limited, Khadem al-Qubaisi, and CEO Mohammed Al Husseiny, the trio were the middle guys who take a certain percentage from billions of dollars sent to PM Najib Razak’s private bank account. The actual source of money is still a question mark but an educated guess is never far away from 1MDB.

While the letter gifting US$375 million to PM Najib Razak is too good to be true, it would be terrible news to the prime minister now that a state-owned Australian Broadcasting Corporation has published the document. So far,Najib only admitted to the US$681 million discovered in his private banking account. 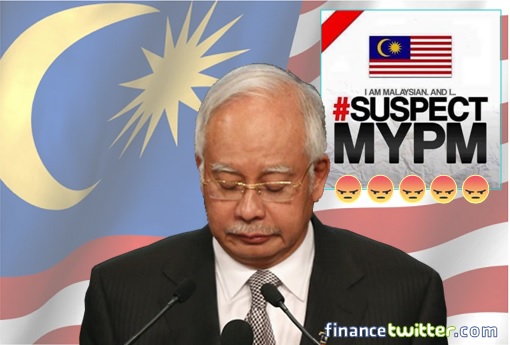 And his buddy Attorney General Apandi Ali thought the scandal was over by cooking up a story that US$650 million had been returned. With the latest bombshell by ABC, how does Najib, Apandi and his supporters plan to justify the story of US$1,050,795,451.58 (RM4.15 billion by today’s rate) allegedly sent to his private banking account?

On the other hand, if the letter is genuine and wasn’t cooked by ABC, Najib’s office should have a copy since it was addressed to him. But why didn’t he reveal the letter which was drafted more than 4 years ago on 1 November, 2011? Will the prime minister childish enough to say his dog or cat ate the document? 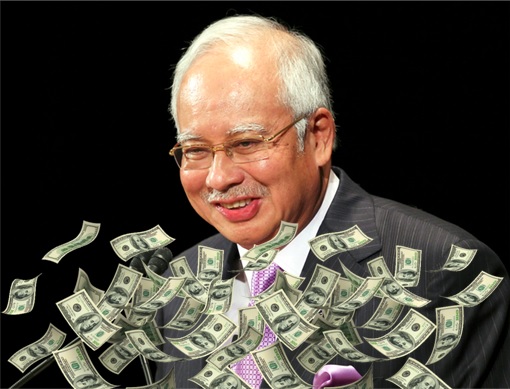 Essentially, Najib son of Razak will have lots of explanation to do with the 191 UMNO division chiefs, who may or may not receive their fair share of the looting (or rather donation) because the general knowledge was he admitted to receiving US$681 million, not US$1 billion. Did he deliberately hide or destroy the document, so that no one knows he had helped himself to a portion of the money?

Be the first to comment on "NAJIB CANNOT BE SAVED: UMNO WARLORDS SHAKE THEIR HEADS AT LATEST US$ 375 MIL FAKE LETTER EXPOSE"